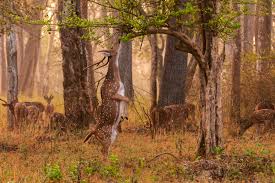 When is the last time you took a drive through the hill country?  Slightly different scene than when you were a kid, was it not?  Or have you paid attention?  Next time you drive through Edwards Plateau get your kids to play the axis/whitetail game instead of I-spy or the license plate game.  1 point axis, 1 point whitetail.  I bet the outcome blows your mind.

Are there actually more axis than whitetail, no not at this time.  Is the race growing closer, most definitely.  “Ya but isn’t just in the high fences?”  Sure, that equates for a huge portion of the population but check out the sections of low fence while you’re at it.  The numbers are astonishing.  Am I saying that the whitetail deer are disappearing, not a chance.  The whitetail are kings to our country and will remain in our state for the extent of our current lifetime.  However, the axis deer have a better genetic makeup to thrive and eventually take over if the situation was left up to none other than mother nature.  In the case of natural selection and only the strong survive, Darwin would most certainly tell us it is only a matter of time.  Am I an expert, not in the least, but I can see past the dollar signs and read the scientific data enough to understand the impact of the species if left uncontrolled?  Don’t go crazy on me now.  I’m not classifying Axis deer with feral hogs.  I love the species and would be utterly sadden to ever be witness to a bounty or poison program placed on Axis however, I do feel as stewards of the native species we have to pay attention to our regulations of any and all exotic species.  Let’s take a closer look at why this specie might scare the native purist.

The basic facts appear pretty similar with only a few slight discrepancies those differences however can play a major role over a given amount of time.  The three most important differences are Food Source, Sexual Maturity, and Breeding Time Frame.  Below I will break those down to give us a better understanding of their importance.

We can all see that the main difference is that Axis deer have the ability to gain nutrients from grass where a whitetail is unable to perform the same tasks.  This would be a non-issue and simply a benefit of the axis deer if the body size was also the same, but it’s not.  On average the axis deer will stand 4 inches taller at the normal shoulder height and 6 inches longer when standing on his hind legs.  When would this ever come into play?  Simple, the browse line!  Or by definition, The level below which the foliage of trees and shrubs can be or has been reached and eaten by browsing animals.  In theory the axis deer has the advantage of being able to take the browse line higher than the whitetail deer.  What effect does this have?  The axis deer have the ability to take a food source away from the whitetail over a certain amount of time given their genetic height advantage, ultimately reducing the whitetails food source down to forbes.  This is why supplemental feeding in high fence situations is such a necessity but in a natural habitat the supplemental feeding would not come into play.

In the most lament of survival terms, the Axis deer has 3 feeding options and over time could reduce the whitetail to 1 feeding option.  We must also remember that forbes are usually the most readily available and desired form of nutrient for both species and therefore that number will be reduced as well because of both species participating in the consumption.  We could realistically place the number at 2.5 to 1 in natural food sources available for axis versus whitetail.  Over time without supplemental feeding this would cause a major swing in the animals per acre the land could support between the two species.

In the case of sexual maturity it is easy to see that female Axis deer are available to be bred 10 months prior to a Whitetail born on the same day.  For example purposes only let’s say both animals were born on April 1st 2018.  In this example the axis doe would be available for breeding on June  1st 2019 and would on average be dropping 2 axis fawns on January 15, 2020.  She will wean the fawns 4 to 6 months after birth and will be ready to breed again immediately not dependent on the month.

In this example the Axis doe will be weaning her fawns and looking to breed again for the second time during the same time the Whitetail doe will begin birthing her first set of fawns.  If you put a calculator to it you can easily see how the Axis deer have the ability to produce significantly more fawns throughout their lifetime than the native whitetail.

This simple chart allows us to see that we are left with a species whom, on a neutral site will not only out produce the native whitetail but also reduce its food source causing a natural decrease in population size.

I love both species.  I want them both to have healthy sustainable herds across our state.  They both give us fantastic hunting opportunities as well as organic groceries that are not readily available at the big box retailers.  On the flip side, I love the purity of the Whitetail deer and their native heritage.  It’s such a hard position for a person with my beliefs.  I guess the ultimate goal would be to find the magic number that allows the hunting opportunities of the exotic species without effecting the growth of the native species but as a realist I know that number will never be documented.  The majority of hunters are also fans of history which introduces the irony of our situation.  It seems as if we are in the position of reliving the Europeans coming to America and pushing aside the natives.  They are still here but it’s just not what it once was.  Will this scenario ever get to that point?  Probably not, but depending upon which side of the fence you sit, it’s either scary or interesting to think about.

Owner and Lead Guide of Black Water Guide Service. Sky has lead thousands of hunters through some of the most amazing experiences of there lives. Read Pro Hunting Tips from an experienced Texas guide who's been through it all.