If Beauty and The Beast were to conceive the offsprings could only be a Texas Gemsbok! 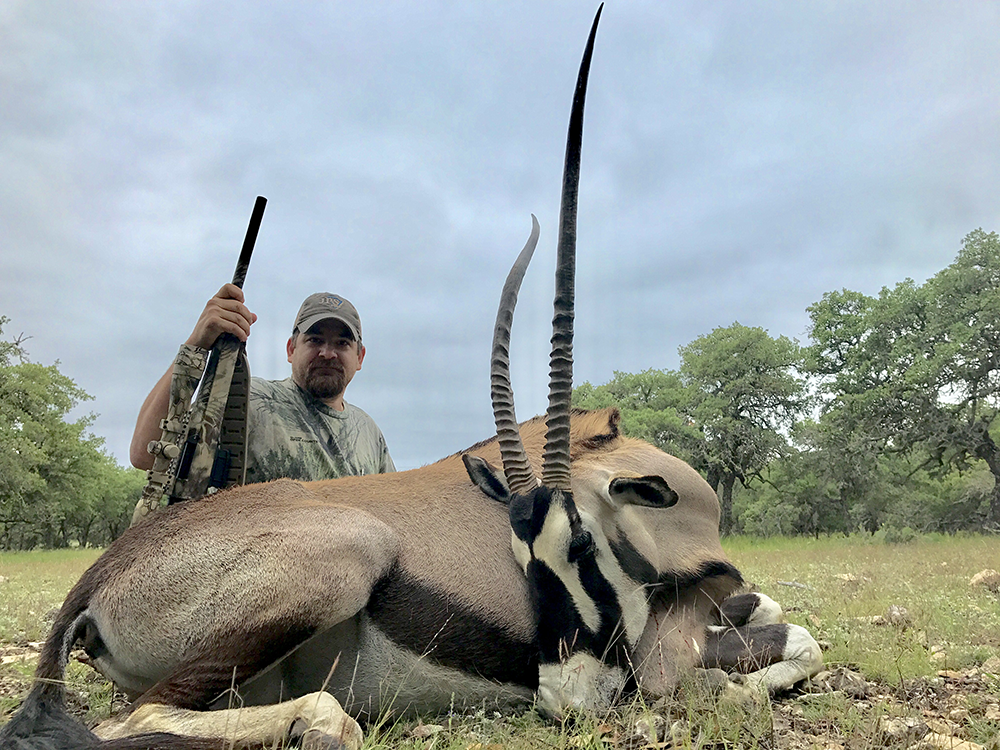 About our Texas Gemsbok Hunts

With the appearance of the masked Zorro, the Gemsbok is a creature whom's beauty is unmatched by most animals on the planet. The treat of a Texas Gemsbok hunt is not only the sheer size and imagery of the species but also the unmatched taste of the meat they provide.

Why you should hunt Texas Gemsbok

‍Our herd of 30 plus Gemsbok is growing each year and the quality of our animals has proven to make BWGS the top outfitter in the state to book you Texas Gemsbok hunt. Simply seeing them from afar is not enough for our guides. We will put you in close proximity of the beast and the beauty of their masked faces will be engrained in your memory forever.

The amount and quality of the meat coupled with the magnificence of the trophy value makes hunting Gemsbok in Texas with BWGS one of the most cost effective vacations a hunter could enjoy.

Our cost is $250 per day for lodging, meals, guide, transportation, and game care

The Gemsbok (Oryx gazella) is the common name given to the largest and most well known of the 3 species of Oryx. Due to their horns being so lethal, Gemsbok have also been called the ‘Sabre Antelope’. Its name is actually derived from the German word for a male chamois, although they are not related. Gemsbok are distributed around deserts, scrublands and brushlands in South Western Africa.

Gemsboks stand around 4 feet 7 inches at shoulder height and weigh between 230 – 250 kilograms (females weigh slightly less than males at around 200 – 210 kilograms). Gemsboks coats are a light brown/grey colour with lighter patches to the bottom rear of their rump, and sandy grey flanks. A dark stripe extends from their chin and travels down to the bottom of their neck, over their shoulder joints and leg along their lower flanks and on each side of their rear legs. All four legs are black on their top half, with white below the knees and black patches on the shins.

Gemsbok have a horse-like posture and gallop and have muscular necks and shoulders. They have a long tail with black flowing hair.

Both male and female gemsbok have long, sharp, pointed horns (female horns are longer and more slender). These horns can extend up to 33 inches in height. The tips of the horns are pointed and sharp and native Africans have used the tips for spear points. Gemsbok also have very distinctive tan, black and white facial markings which make them easily identifiable.

Gemsbok are able to survive in even the harshest conditions thanks to an intricate network of blood vessels called carotid rete, situated in the nose which cool down the blood supplied to the brain. This happens because of the rapid inflow and outflow of air created by the gemsboks panting and therefore protects the gemsbok from deadly temperatures. At the same time, however, the gemsboks body temperature is allowed to rise – eliminating the need to perspire (sweat), and therefore preserving water.

Gemsboks are gregarious and sociable animals, spending time on open plains. Gemsboks can be seen in herds of 10 or more individuals, however, when food is scarce, usually during the dry season, they break up into smaller groups.

Gemsboks do not have a specific breeding season. A single calf can be born at any time of the year after a gestation period of 9 months. Males reach sexual maturity at about 5 years of age whereas females start breeding as young as 2 years of age. The young remain hidden in the grass and are suckled by their mother for 3 – 6 weeks after which calves will join their mothers and the rest of the herd or a nursery herd.

The female Gemsbok comes into heat again shortly after giving birth. The horns of the calves grow extremely fast and when they emerge from concealment after birth their horns are very prominent. The life span of a gemsbok is 18 – 20 years.