The Last Dinosaur Hunt On Earth! 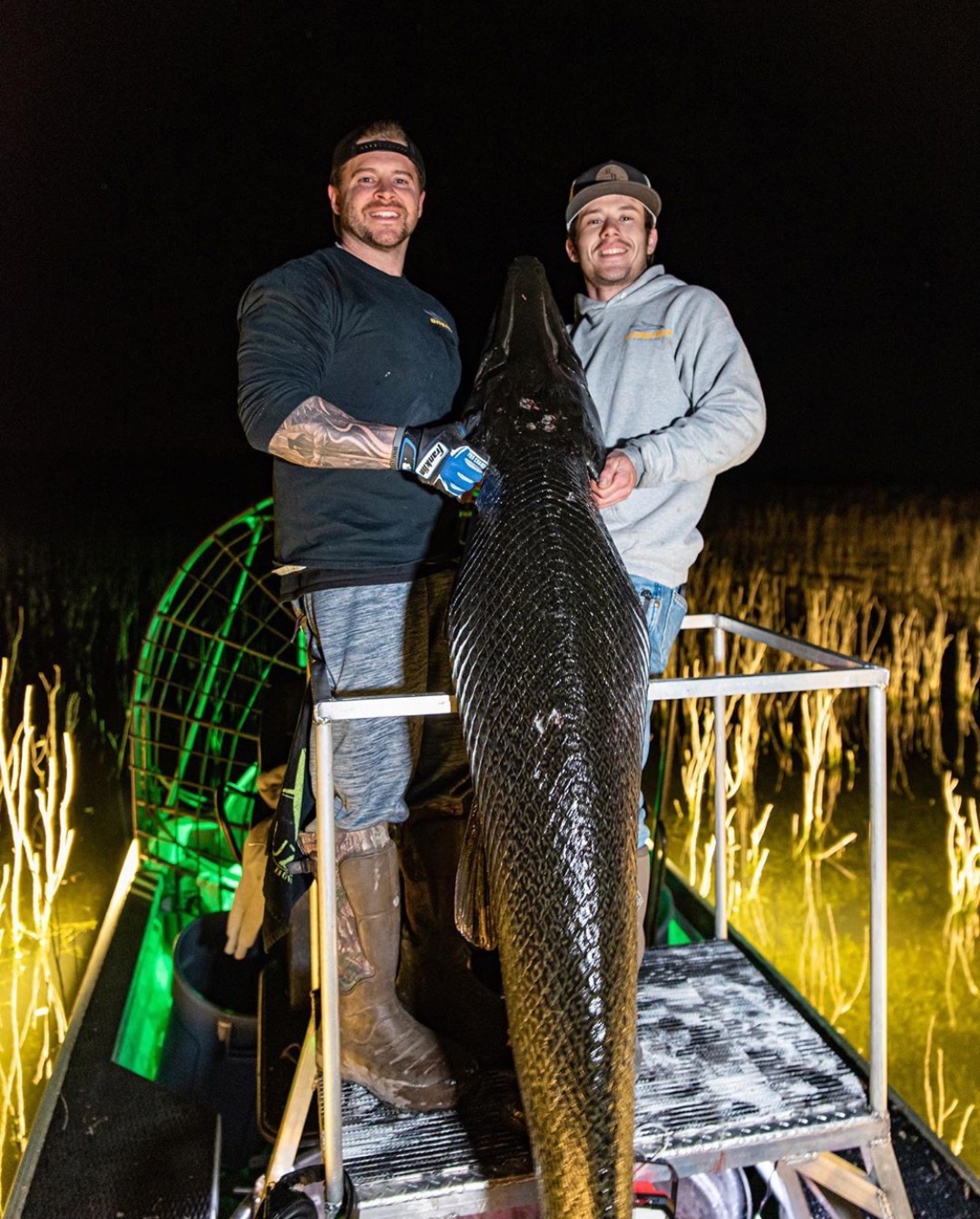 We aren't the cheapest but we do have the best gator gar bowfishing trips in Texas. What's the difference between us and the competition...back to back World Championships and 13 State Championships. Our guides are literally the best bowfishermen in the world!

Boat Types: All boats run during a Black Water bowfishing trip will be top of the line Air Boats and Custom Bowfishing Trolling Boats.

Location: All locations for guided Gator Gar bowfishing trips will be determined during your hunt consultation. We do not have set locations. Instead, we make sure that we will be bowfishing at the best location during the time of your trip.

Equipment: All necessary bowfishing gear will be provided during your trip. We do suggest you bring your own gloves (work gloves, or baseball type batting gloves), proper footwear (boat shoes or muck boots), pants and a sweatshirt or jacket. We ask that the entire group keep all personal items in one group bag. Having loose items on an Airboat is dangerous and a potential to cause mechanical engine failure if something gets lodged in the fan.

License: In order to participate in our Gator Gar Bowfishing trips you will be required to have a valid Texas Fishing License which can be found here https://www.txfgsales.com/

Pricing: Our Gator Gar trips are $2500 for the boat and you are allowed between 1 and 3 people per night. Cost can be split by up to 3 people.

Gars are easily distinguished from other freshwater species by their long, slender, cylindrical bodies, long snouts, and diamond-shaped interlocking (ganoid) scales. The tail fin is rounded. Dorsal and anal fins are placed well back on the body and nearly opposite each other.Alligator gar is the largest of the gar species. It can grow up to 8 feet long and weigh more than 300 pounds. Adults have two rows of large teeth on either side of the upper jaw. Coloration is generally brown or olive above and lighter underneath. The species name spatula is Latin for "spoon", referring to the creature's broad snout.

Alligator gar can live for many decades. They grow very fast when young, but growth slows with age. In general, for every additional foot the fish grows, its age doubles. A 3-foot gar is typically about 2.5 years old; a 4-foot gar about 5, and a 7-foot trophy catch might be 40 years old. The world record, caught in Mississippi in 2011, weighed 327 pounds and was probably at least 95.Alligator gar are slow to mature; they usually don't spawn until they are about 10 years old. Spawning typically takes place in shallow areas of flooded vegetation when springtime water temperatures exceed 68 degrees. In Texas, this generally occurs in April and May. Eggs hatch within a couple of days. Young fish feed on larval fishes and insects. Adults will eat whatever they can catch, consuming primarily fish, but occasionally taking birds, mammals and other animals.

Alligator gar are present in the Gulf coastal plain from the Econfina River in Florida west and south to Veracruz, Mexico. The historic range extends north in the Mississippi River basin to the lower reaches of the Missouri and Ohio rivers. In Texas, alligator gar may be found in large rivers and reservoirs, as well as in coastal bays.Recent surveys indicate the species is declining or has disappeared in many areas of the southeastern United States. Texas populations are still strong.

Threats and Reasons for Decline:

Good conditions for spawning don't happen every year, and there may be years when alligator gar produce few if any offspring. The long life span of this species has no doubt enabled it to survive periods of drought and low river flows; however, it also means that populations could take decades to recover from effects of overfishing.

The Texas state record is 302 pounds, caught on a trotline in 1953. Bow fishers and rod and reel anglers have landed several specimens in excess of 200 pounds.Historically considered a "rough fish," the alligator gar has recently gained popularity as a sport fish, attracting national and international attention after being featured on several television shows. Texas has one of the best remaining fisheries for this unusual freshwater fish. To help ensure that high quality, recreational fisheries remain compatible with long-term conservation of the species, Texas Parks and Wildlife Department imposed a one-per-day bag limit on alligator gar beginning in 2009.