Few know more about the Axis deer than Skyler Watkins. Our years of hunting, tracking, listening, watching, and ultimately harvesting the spotted ghost will make the difference in your success on this elusive species. 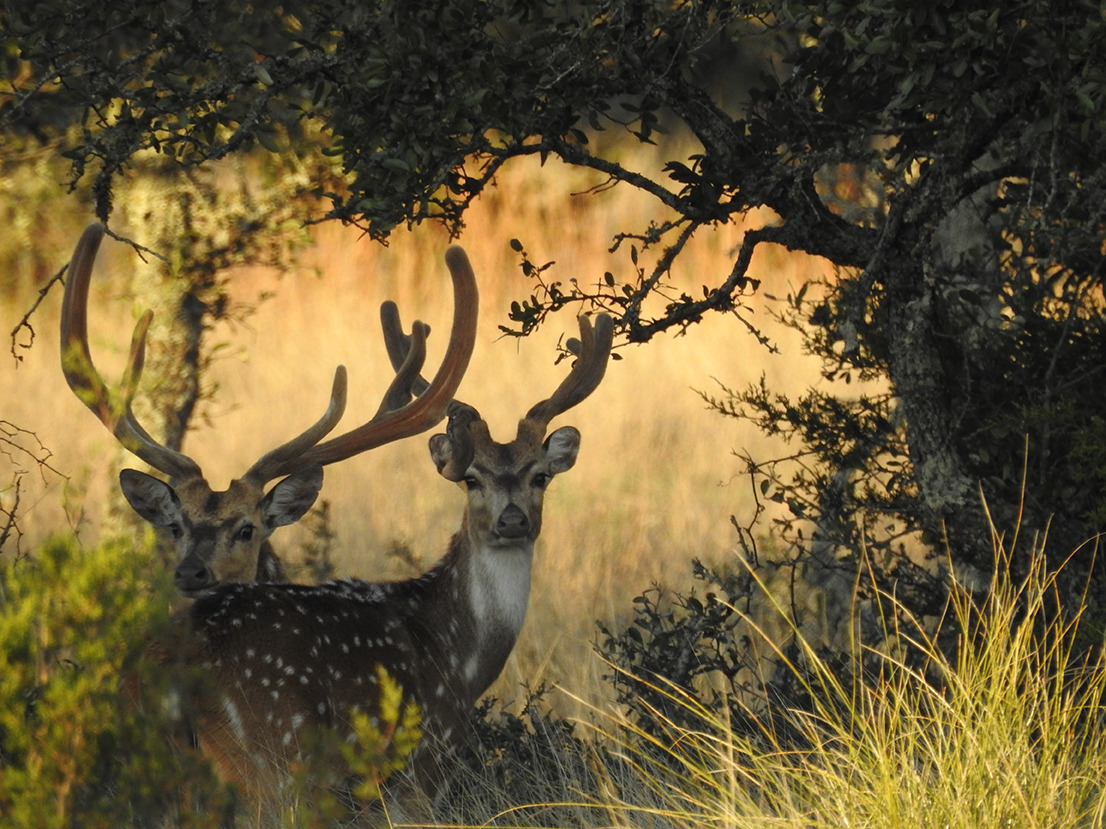 About our Texas Axis Deer Hunts

Tired of eating the same old whitetail? Interested in harvesting the tastiest deer species in the world? Join BWGS on one of our Texas Axis deer hunts. Axis deer hunting is not an easy task however, no matter if you are going for trophy bucks or even the does. Axis hunts in Texas are by far the most sought after adventures in the exotic hunting industry and nobody has more success than BWGS.

How Do We Hunt Axis Deer

All of our Texas Axis Hunts are conducted by 3 ways. We will either hunt from a blind, perfrom a spot and stalk method, or use the utv to glass and try safari style. All of our properties consistently produce fantastic representations of the Axis deer species. Our pricing differences are solely based on landowner charges and quality of lodging facilities. None of our hunts are on a pay per inch or size pay scale. On any axis hunt you book with Black Water, we will do our best to put you on whatever buck makes your dreams come true.

We start all of our hunts with a noon day 1 meeting, sight in the rifles, and take a trip around the ranch to allow you to get a feel of your new surroundings. During our short drive we will usually spot a few axis bucks and allow you to get a decent size reference to ensure we are all on the same page about what we are after.

After a quick break and snack the real hunting will begin. Your guide will come up with the best plan possible for harvesting a trophy buck. We have a few articles for your reading enjoyment to help you see what type of hunting you might be doing depending on what time of year you are hunting with us CLICK HERE for the velvet info.

After the afternoon and morning hunts we will always return to the lodge for a home cooked meal and fellowship around the table or campfire. Upon killing your Axis buck, your guide will assist in pictures, caping, cleaning, quartering and getting your trophy on ice. On this hunt your only responsibility is to be safe, shoot straight, and have fun, we will take care of the rest.

We run upwards of 100 Texas Axis deer hunts each year and our clients continue to harvest trophy after trophy. Our success for 2018 has been phenomenal and we are averaging a consistent 32-33" with our largest being over 36" this season.

The beauty of hunting Axis deer with BWGS is that we have 3 separate herds and do not have to play by the "rut" rule that most outfitters will try to trick you into. Sure, axis have a heavier rut in the summer months but don't be conned into believing that June-August is the best if not only months to harvest a monster Axis buck. The reasoning you will hear this from outfitters is usually one of two scenarios. Either they don't have "winter" bucks, meaning that their axis herd is only hard horned during the summer months; Or they are trying to offset their earnings by focusing on whitetail during the winter while hoping to market people into hunting Axis deer during the summer.

The pricing structure for our Texas Axis deer hunts is very easy to follow.

$250 per person per day provides your lodging, meals, guide, transportation on the ranch and game care.

The axis deer, or chital is native to India. It dons a bright reddish coat covered in white spots that remain throughout life. Antlers of males are large but simple, usually with only three points. Adult males weigh up to 200 pounds and females 35 percent less. The axis deer was first introduced into Texas in the 1930s and now occurs in at least forty-five counties. Largest numbers occur on the Edwards Plateau, where the dry scrub vegetation resembles that of its native habitat in India. Essential habitat components include water, woody vegetation for cover, and open areas for feeding. This deer is primarily a grazer, but its food habits are very general, and it can exist quite easily on forbs and woody browse. In contrast to the white-tailed deer, which typically eats only a few foods, the axis deer eats small quantities of a large variety of plant species. This broad-spectrum diet gives it an advantage in competition with other deer.

The reproductive activity of the axis occurs year-round, but most breeding occurs in June and July. Single fawns are born the following spring after a 7½-month gestation period. During the breeding period males bellow loudly and wander in search of receptive females. Females mature sexually and first breed at fourteen to seventeen months of age. Males are probably capable of breeding as yearlings but must achieve adult size to compete for females.

The basic social unit is a family group that consists of an older female and her offspring. A herd consists of two or more family groups. Other social groupings consist of loosely structured male herds and, between February and April, nursery herds composed of females with fawns. Vocalizations are important in axis deer society and one of the most noticeable characteristics of this animal.

Axis deer are more active by day than by night, with greatest activity occurring for two to three hours after dawn and again before dark. The size of the home range varies with habitat and averages 2½ square miles in the coastal live oak region. Axis deer do not seem to be territorial, but males fight, often with serious consequences, for possession of females.

In Texas the major predators of the axis are coyotes and bobcats, but predation does not seem to be serious. Axis deer are also remarkably resistant to disease, a fact that may help explain their success as introduced animals.

With few exceptions, axis deer are not regulated by game laws. Therefore, they are important in sports hunting and offer hunting opportunities at times when native species are not available. As a sporting animal, the axis deer provides a fine trophy. The meat is of excellent quality and lacks the strong game flavor sometimes associated with venison.