The ultimate representation of power breaking out of the wall in your man room. Ever trophy rooms needs an Aoudad to be complete! 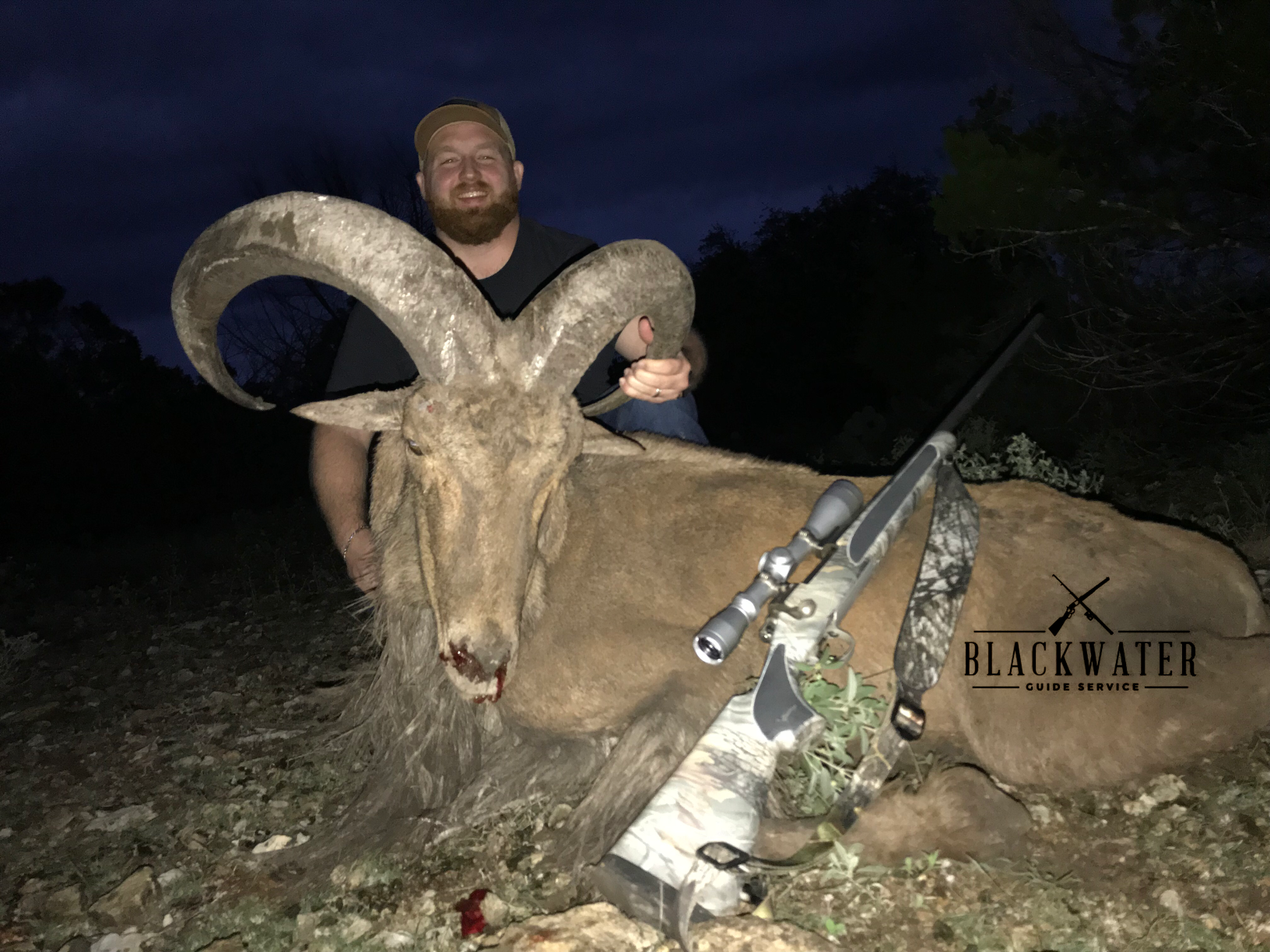 About our Texas Aoudad Hunts

Built like a truck with a beard only Fabio could sport, Aoudad are some of the most manly looking exotics we are fortunate enough to hunt in Texas. Texas Aoudad hunts are a bucket list item for most hunter in the U.S. and BWGS has a herd of over 400 to choose from.

Hard nose, cliff climbing, mud wrestling, feeder hogging, head banging creatures. These are the best terms we can think of when talking about Aoudad. Texas Aoudad hunts can go one of two ways. We either hit the October rut just right and find a monster ram coming down to feed and water...Or we have to go sun up to sun down glassing the canyons and putting a spot and stalk on a trophy ram. Either way if you choose a Texas Aoudad hunt with BWGS, you're gonna go home with an Aoudad.

Averaging 27 to 34 inches in horn length with a beautiful set of beard and chaps to go with, Texas Aoudad hunts provide the opportunity at a once in a lifetime trophy at a cost on BWGS can provide.

More about the Texas Aoudad

A relatively large sheep with horns curving outward, backward, and then inward and marked with strong transverse wrinkles; horns of females similar but somewhat smaller; tail relatively long, reaching nearly to hocks and with long hairs on terminal half; a conspicuous growth of long hair on throat, chest, and upper parts of front legs; no beard as is found in goats; upper parts and outer surface of legs uniform rufous or grayish brown; blackish mid-dorsal line from head to middle of back; flanks, inner surface of legs and belly whitish, but the chest colored like the sides; horns yellowish brown, darkening with age, set close together.

Native to the dry mountainous areas of northern Africa; introduced into the Palo Duro Canyon area of Texas in 1957-58, where it has become firmly established. Also present in the Edwards Plateau, Trans-Pecos, South Texas, Rolling Plains, and Post Oak Savannah regions as a result of private introductions.

This sheep, also called the aoudad, is adapted to a dry, rough, barren, and waterless habitat — much as is the native bighorn sheep of our southwestern deserts. Consequently, it is quite likely that these two could not survive together in the same area because of competition between them.

These sheep live in small groups comprised of old and young animals of both sexes. They are expert climbers and can ascend and descend slopes so precipitous that man can negotiate them only with great difficulty. Consequently, they are difficult to hunt.

Their food consists of a wide variety of vegetation including grasses, forbs, and shrubs. Apparently, they are capable of producing metabolic water and can survive for long periods without access to fresh water. However, when water is available they utilize it for both drinking and bathing.

These sheep were first brought to the United States in about 1900 and have been reared in zoos and on private preserves for a number of years. They were first released in the wild in New Mexico in 1950 and in Texas in 1957, when 31 were released southwest of Claude in Armstrong County. Thirteen more were released near Quitaque. These introductions were highly successful in the Palo Duro Canyon area. By May of 1966 the population had increased to an estimated 400-500 sheep. By 1963, the population had increased to such a level that a controlled hunt was deemed advisable. Forty-two permits were issued; six rams and three ewes were harvested. In 1964, 50 permits were issued; eight rams and seven ewes were harvested. In 1965, 70 permits resulted in a harvest of eight rams and eight ewes. Statewide, the population in 1989 was estimated at over 20,000.