Black Water Guide Service is the place to go for Texas Blackbuck Hunts! They're like Lays potato chips...Bet ya can't see just one! 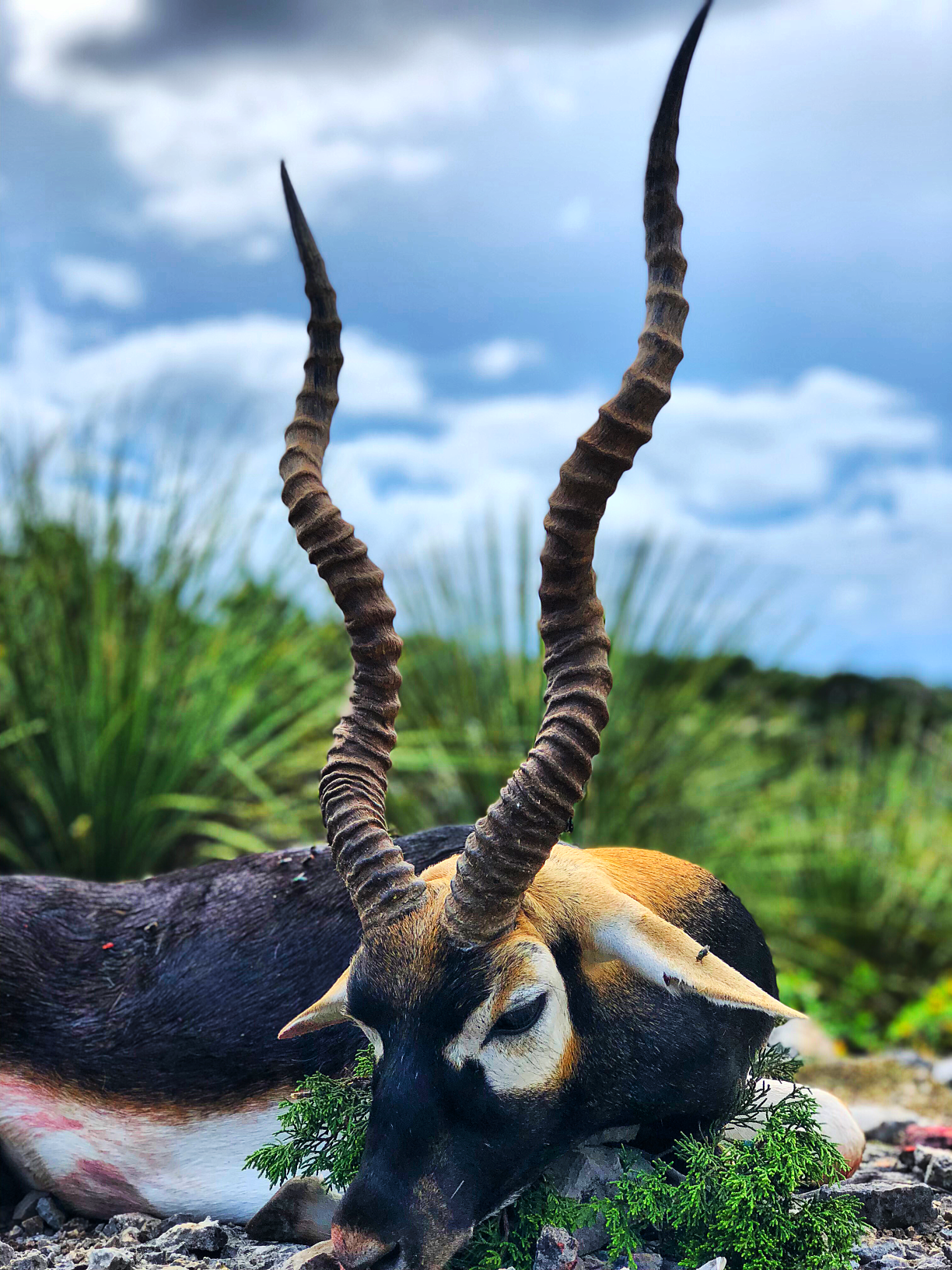 Known as Mr. ADHD of the animal kingdom, the Blackbuck antelope never quits moving. If he's on your hit list you better be quick but if you look at our previous client photos you will see that BWGS is your best bet if you're in the market for Texas Blackbuck hunts.

More About our Blackbuck Outfitter Services

Averaging any where from 17" - 23" BWGS clients have harvested countless numbers of quality antelope while participating in our Texas Blackbuck Hunts. This species, although not very big, makes for a fantastic trophy and great eating. Considering the amount of time they spend on the run, these antelope actually present our clients with numerous shot opportunities throughout their adventure. From kids to grandparents, rest assured that if you are on a Texas Blackbuck Hunt with BWGS, you will get a shot!

Seeing how the animals are horned and not antlered, you can plan your Texas Blackbuck Hunts at anytime of the year. Our herd has proven to sport the darker colors during the fall and winter months however and this is the timeframe that the majority of our clients wish to harvest the species.

The cost associated with a Texas Blackbuck Hunt at BWGS is;

There are no additional fees for "trophy" sizes. Let's go get the biggest blackbuck we can find!

The Indian blackbuck antelope is one of the most popular exotic animals in Texas. Since introduction in Kerr County in 1932, the blackbuck has multiplied to nearly 19,000 on ranches throughout the state. Nevertheless, most still inhabit the Edwards Plateau. Here the control of coyotes to protect sheep and goats from predators has favored the blackbuck. The main problem with this native of the warm Indian subcontinent is occasional winter kills, which occur when snow hides pasture vegetation and prevents the antelope from getting enough food to maintain sufficient body heat.

As the name blackbuck implies, males darken at maturity. White highlights the eyes, ears, chin, underparts, and rump. Even fawns have these markings. They are brown but turn tan after about a month. Grown males have ringed horns spiraling in a V at least thirty-three centimeters (thirteen inches) above the head. Record trophies exceed fifty centimeters (twenty inches). Texas males average seventy-five centimeters (twenty-nine inches) in height at the shoulder. Females average seventy centimeters (twenty-eight inches). Live weights on Texas ranges average thirty-eight kilograms (eighty-three pounds) for males and twenty-six kilograms (fifty-eight pounds) for females, and maximum weight approximates fifty-seven kilograms (125 pounds) and thirty-three kilograms (seventy-three pounds), respectively. The blackbuck eats mainly grasses. As summer dries these, it eats more browse. Pods, fruits, and flowers supplement this diet. Blackbucks are timid at feed stations and will stand back while other animals feed. They can compete with the native white-tailed deer, however, when natural food is sparse, because whitetails cannot match the blackbuck's versatility in the use of different plants.

The social units of the blackbuck are female groups, mixed groups of both sexes, bachelor groups, and territorial males. Since territorial males monopolize prime grazing, female groups frequent their territories. Each territorial male commands about 1.2 to 16 hectares (three to forty acres). Territorialism facilitates breeding by giving the male a clear field for courtship. If a doe tolerates following, the "mating march" changes into circling, with the male in a "nose-up" display. A successful mount ends courtship. The average interval between births is six months, with gestation comprising approximately five months. The single fawn can be born at any season. Initially, the fawn lies in the grass between nursing sessions. Then it gradually joins the mother's group. Between six months and one year old, increasing harassment from territorial males, plus the zest for sparring, sends young bucks to bachelor groups. Males mature sexually by eighteen months but take about 2½ years to reach physical maturity. When they attain full strength, they are ready to become territorial at any opportunity. Females can conceive as young as eight months, although most first-time mothers conceive at around seventeen months. Females mature physically by one year. Few blackbucks live longer than twelve years, and their maximum lifespan is about sixteen years.