Many offer predator hunts but we actually offer a Bobcat specific hunt with 100% shot opportunity for 2017-2018 season! 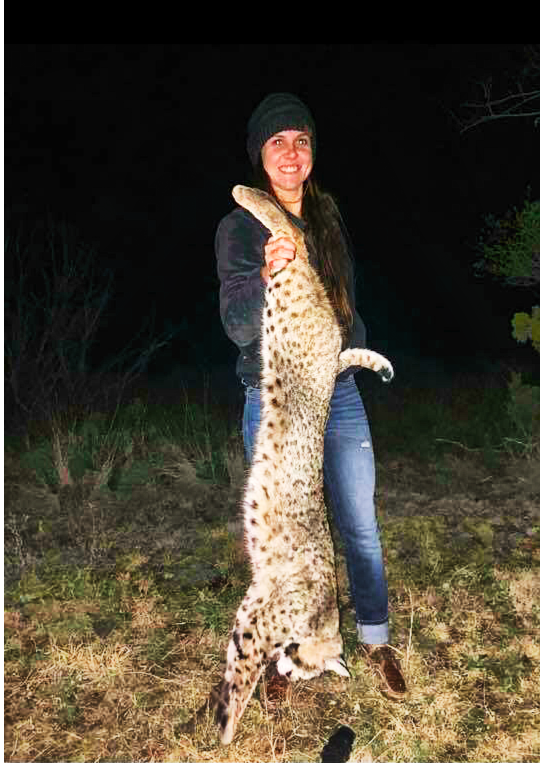 With over 500,000 acres of hunting ground in West Texas, Black Water Guide Service is able to all but guarantee you a trophy Bobcat to hang on your wall at the house or office. Our hunts are fast pace and the most successful in the state of Texas for Bobcat specific hunts.

Location: West Texas from San Angelo to El Paso and as far south as Sanderson

Hunt Type: Night hunts with use of artificial lights by Coyote Light gear from Fox Pro and sounds from Tony Tebbe. Use of high rack and custom shooting chairs to increase odds.

Lodging: Some ranches have lodging for free, at other times we may have to rent a hotel/motel room.

Food: We provide a cooler with drinks, water, and snacks. You are welcome to bring additional snacks and drinks if desired.

Shot Opportunity: This hunt was 100% opportunity rate for the past season. That success rate is unmatched in our industry.

Gun Type: You are welcome to bring your own predator hunting rifle or use our guns and silencers for a minimal ammo fee.

Ability To Harvest Other Species: Yes. We will also encounter fox as well as a possibility of coyote and mountain lion. Your choice to shoot any predator you see at no additional fee.

Hunt Dates: We allow hunting for Bobcats year around but the most optimal time is October through May.

Biologists recognize two subspecies of bobcats in Texas – the desert bobcat found in the west and northwest part of the state and the Texas bobcat, which ranges over the rest of the state – but they are so similar that it takes an expert to tell them apart. Generally speaking, a bobcat is about twice the size of a domestic cat. It has a larger bone structure, especially in the legs and head, and it is more muscular and better adapted for springing. It also has a deeper jaw that allows its mouth to open wider. Its ears are prominent, pointed, and tipped with ear tufts of black hair that assist in collecting sound to improve its hearing. Just how these hairs help with sound reception is not clear, but removing them will make a difference. A ruff of cheek fur extends from the side of its face, and it has long white whiskers.

Adult bobcats are usually twenty-five to thirty inches long, stand fifteen to twenty inches tall at the shoulder, and weigh between fifteen and twenty-five pounds. They have a short tail about six inches long. The male and female look alike, but the male will be larger. Occasionally a large male in the thirty- to thirty-five-pound class will be found. Color varies among the cats, but as a rule the bobcat is a cream-buff shade with tones of gray and brown, mottled with spots. Some cats may have more gray and others more brown. The lighter belly area is spotted.

The bobcat hunts by a method in which it stops, sits, and waits for prey. These waiting spots are called lookouts and hunting beds. As the bobcat crouches and waits, it slowly rotates so it can watch the area all around it. This action results in a circular "bed" with paw prints around the edge. The bobcat also depends on sight and hearing to locate smaller prey, moves as close as possible without being seen, and then makes a short dash to capture it.

‍Bobcats are solitary animals and do most of their hunting at night. The range varies with food abundance and may cover as much as fifty miles or as little as five. When rodent and rabbit populations are high, a bobcat may travel only half a mile a day while feeding. Females seldom overlap the ranges of other females, but they do overlap those of males. Male ranges overlap more often since they have much larger ranges than the females. Both sexes are usually tolerant of transient juvenile bobcats moving through their territories. In fact, bobcats seem to try to avoid running into each other except during the mating season.

Breeding usually begins in February, and about fifty days later the young are born in dens located in caves and crevices or under logs, barns, or sheds. Litter size may vary from two to seven, but two is most common. The blind young are well-furred and spotted at birth and they begin to suckle immediately. They weigh about ten to twelve ounces. Their eyes open in about nine days. The mother has the responsibility of raising them, and she defends them from all predators, including male bobcats. By the time they are a month old, they are learning to walk with agility, and solid food is being added to their diet. They are weaned when they are about two months old. If the mother can keep them fed and hidden from humans, they probably will survive. The young remain with their mother until early fall, and then they must strike out on their own. Young females will be ready to breed when they are about a year old. The males mature during their second year, and the cycle begins again.

All info provided by the Texas Parks and Wildlife at https://tpwd.texas.gov/publications/nonpwdpubs/introducing_mammals/bobcats/