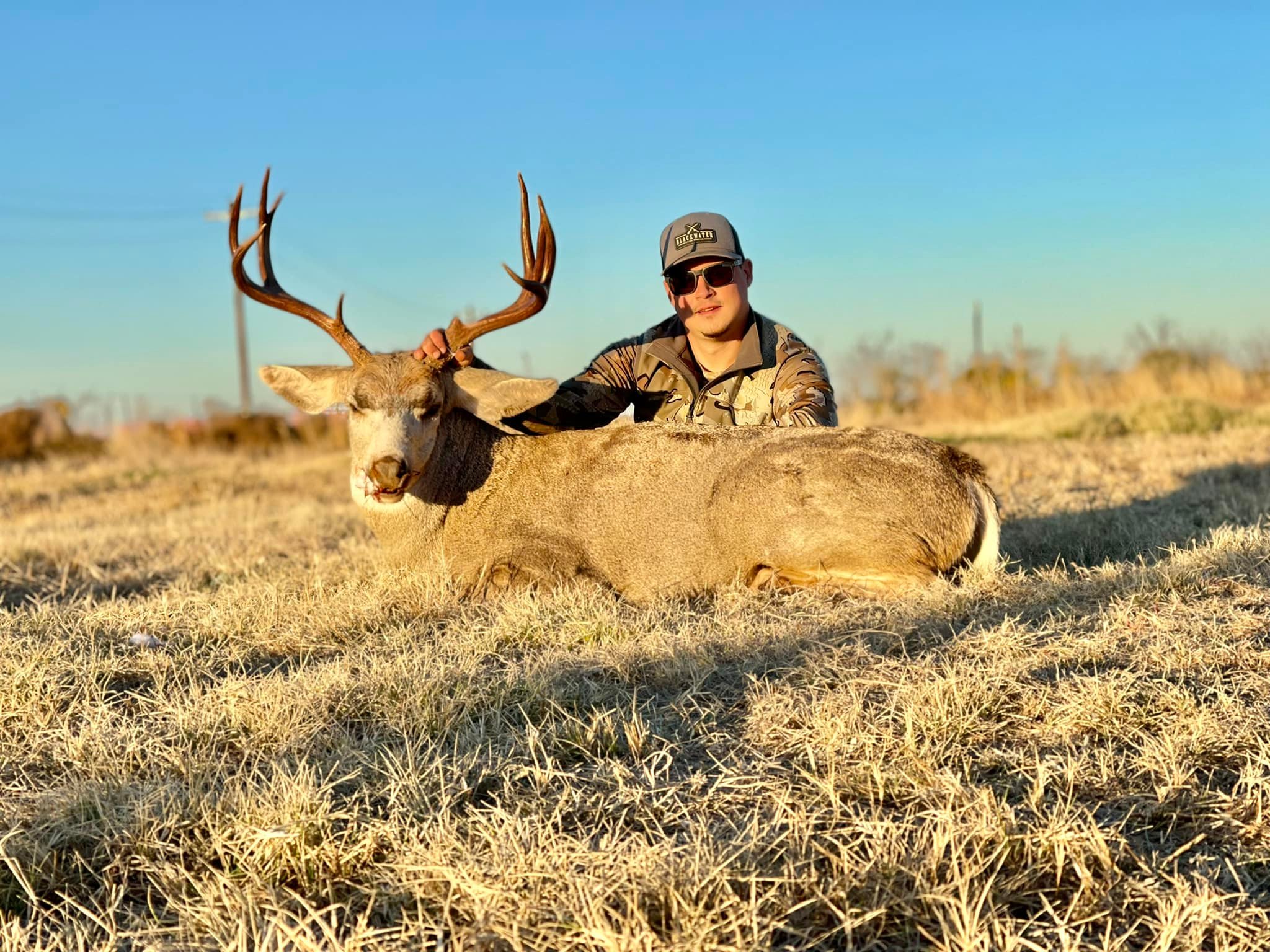 Texas Mule Deer hunting at its finest. Most forget about the state of Texas when it comes to mule deer hunts but we are actually sitting on a hidden gem for this species. You don't have to apply for tags and it wont cost you a house mortgage, at least not if you hunt with us!

Our Mule Deer hunts are conducted in the Texas panhandle throughout Hall county. Beautiful country of rolling canyons and farm fields. The mule deer absolutely love it and grow into fantastic representations of the species.

Our hunts are 4 days and 3 nights with lodging and 2 meals per day provided. We perform a spot and stalk style hunt with lots of driving and glassing country. Our goal is to put you on a mature Texas mule deer, and we are 100 percent successful at getting you a shot opportunity.

The cost of this hunt is $4500 for single hunters and $4000 for groups of two or more. The deposit is $1500 and if you want a spot for next season, you're going to want to get that deposit in ASAP!

Come join us...You won't be disappointed in the hunt!

Mule deer populations are calculated by Texas Parks and Wildlife biologists through 945 miles of aerial transects and 393 miles of spotlight surveys.

Little grass is produced in droughty periods. This lack of grass production means less ground cover to provide mule deer does crucial hiding places for their fawns. Lack of fawning cover (grasses such as little bluestem, silver bluestem, side oats and other gramas) causes the fawns to be more visible and therefore more susceptible to predation.

Forbs are dependent upon soil moisture and are nearly non-existent during a drought. Since forbs are the most highly preferred and nutritious part of a deer�s diet, lack of forb production means lower deer herd nutrition.

Drought may be the stimulus of habitat degradation, poor reproduction, and poor water distribution but mismanagement of the range is amplified during droughty periods.

Droughty episodes not only provide less plant production, making fewer preferred plant species available to deer, but plants that do grow tend to be of poor forage quality. During these times mule deer are surviving on a less than desirable nutritional plane.

Poor quality forage not only leads to lack of recruitment into the population but also loss of adult animals in the herd. Low quality forage leads to nutritional stress and reduces a deer’s ability to ward off parasites and disease. An unhealthy animal is more susceptible to predation.

Drought is not the only cause of habitat degradation. Mismanagement of the range, overgrazing and subsequent brush encroachment, is another cause and is amplified during a drought.

Over utilization of the range has contributed to brush encroachment over an alarmingly large portion of the Trans Pecos. Desert mule deer (Odocoileus hemionus crooki) have evolved to survive in prolonged dry spells; however, this deer species, unlike white-tailed deer (Odocoileus virginianus), prefers more open rangeland. Brush encroachment makes mule deer more susceptible to predators as they depend upon their eyesight and their ability to quickly move away from danger.

Common sense dictates that without recruitment the population will dwindle. The past ten years have seen few years with a 60% fawn survival and more years with 40% or less. This too has confounding factors. It can be difficult to determine if poor nutrition or poor fawning cover has led to low fawn survival.

The Trans Pecos is known for being cow/calf country. Figures from the United States National Agriculture Statistic Service show West Texas ranchers in a cow/calf operation to have steadily de-stocked from 1978 through 1986, increasing cattle numbers again after the drought broke and again de-stocking over time to the present. This mirrors the fluctuation of mule deer numbers in West Texas and draws attention to the natural de-stocking of mule deer on the range.

Lack of grass production to support livestock grazing has led to poor water distribution across mule deer range. Not only does the lack of infiltration and therefore ground water availability in springs and seeps affect water availability to deer and other wildlife but as cattle are removed from pastures water troughs and windmills are often not maintained and an integral part of mule deer habitat, water, is missing. Remember the importance of water to wildlife and maintain water availability.

Prior to the succession of cow/calf operations in the Trans Pecos sheep were the main livestock class. At that time predator control was intensively performed on a large scale. The change of livestock class to primarily cow/calf operations has led to less predator control being carried out on a large-scale basis and that, which is being done, being done at a more local level. This had led to higher coyote and mountain lion numbers in most of the Trans Pecos.

Predator control at the Black Gap Wildlife Management Area increased fawn survival and numbers of adult mule deer bucks in the herd. Other research indicates that low mule deer populations can be kept low or suppressed by high predator populations.